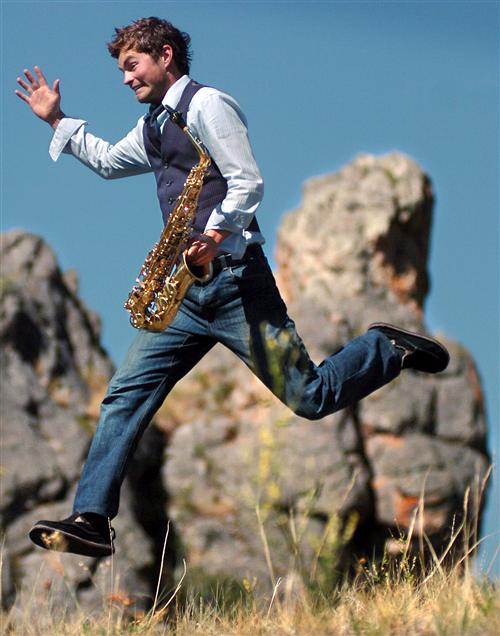 I passionately believe that music education is vastly important to all people. Band students learn the skills needed to perform an instrument, learn about life through music (knowledge) and their feelings/ideas/concepts about it (affect). My goal is to help every student become self-directed, self-assessing, life-long learners, AND to find out how much joy and purpose there is in making music.

Thank you for allowing me to teach you.

Jesse Dochnahl is in his fourth year as the band teacher-conductor at Big Sky High School in Missoula, Montana. An active chamber musician, clinician, and conductor, he has worked with young musicians across Montana, Wisconsin, and Illinois. He served on the faculty at the University of Montana teaching saxophone in 2018. Prior to his appointment at Big Sky, Mr. Dochnahl taught instrumental music at C.S. Porter Middle School (2013-2016) and Sheboygan Falls High School (WI) (2007-2010). In the 2012-13 academic year, he served as Instructor of Saxophone and Freshman Studies at Lawrence University. He was awarded First Prize in the MTNA Woodwind Young Artist (2005) and Chamber Music (2012) National Competitions, and was the winner of the Lawrence Symphony Orchestra Concerto Competition. He has performed as concert soloist with the Manitowoc Symphony Orchestra and the Lawrence Symphony Orchestra and in recitals at the NASA 2012 National Conference, SEAMUS 2012 National Conference, 13th World Saxophone Congress, the 2005 & 2012 MTNA National Conferences, and the U.S. Navy International Saxophone Symposium. Dochnahl has performed with Sinfonia da Camera Chamber Orchestra, Eugene Symphony, Green Bay Civic Orchestra, Sheboygan Symphony, Missoula Symphony, and Helena Symphony. A staunch advocate of new music, Dochnahl has presented world premieres of music by Javier Arau, Ming-Ching Chiu, Andrew Seager Cole, Joanne Metcalf, Asha Srinivasan, Scott Unrein, Stephen Wood, and Carl Wittrock, among others. He earned his Master of Music at the University of Illinois at Urbana-Champaign where he studied with Debra Richtmeyer and holds degrees in music education and saxophone performance from Lawrence University where he studied saxophone with Steven Jordheim. Dochnahl also worked ten seasons as a trails technician with the Forest Service near Ennis, MT, his hometown.
More info and noise at www.jessedochnahl.com
Copyright © 2002-2020 Blackboard, Inc. All rights reserved.